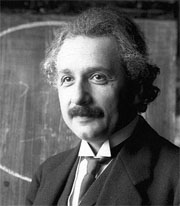 An extraordinary number of 20th century Jewish scientists were drawn into the field of nuclear research. As the Nazi dragnet tightened, dozens of them fled Europe and joined the USA’s Manhattan Project, which built and detonated the first atomic bomb in July 1945.

Albert Einstein’s Theory of Relativity paved the way for investigation into nuclear fission. In 1939 he urged President Roosevelt to build an atomic bomb before Nazi Germany. In later years he opposed the use of atomic weapons.

Niels Bohr (1885-1962) was the first to apply quantum theory to explain nuclear structure. Born in Denmark to a Christian father and Jewish mother, Bohr worked with Ernest Rutherford in Britain. He won a Nobel Prize in 1922, and narrowly escaped Denmark in 1943, pursued by Nazis. He worked on the Manhattan Project with his son Aage, yet also sought to limit the spread of nuclear weapons.

Lise Meitner (1878-1968) was born in Vienna and became a pioneer of research into nuclear fission. She analysed the results with her nephew, Otto Frisch.

Enrico Fermi (1901-1954) was born in Rome. With Walter Zinn Fermi directed the first controlled nuclear chain reaction in 1942 at the University of Chicago. 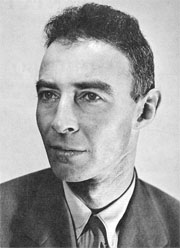 J. Robert Oppenheimer (1904-1967), US-born theoretical physicist, was chosen to direct the Manhattan Project at Los Alamos in 1942. On July 16, 1945, his team exploded the world’s first atomic bomb. Three months later he resigned as project director and opposed development of the H-bomb. Oppenheimer was accused of Communist sympathies by the McCarthyites, but was exonerated.

Hungarian-born Edward Teller led the US team that developed the first hydrogen bomb. Considerably more powerful than the atomic bomb, the H-bomb uses nuclear fusion rather than fission. The first H-bomb was exploded in 1952. Teller later strongly advocated the need for Western nuclear superiority.

In the late 1950s and early 1960s the Labor politician Shimon Peres launched Israel’s nuclear energy (and arms) program near Dimonah in the Negev Desert. In the 1980s, Mordechai Vanunu, a Moroccan immigrant working at Dimonah, told British newspapers about Israel’s secret nuclear arms capability. He was abducted by the Mossad (Israeli intelligence service), convicted of treason and incarcerated in Israel.

Joseph Rotblat (b. 1908), a Polish-born British physicist, won the 1995 Nobel Peace Prize for his continuing work with the anti-war Pugwash Conferences group. He had quit the Manhattan Project in 1944, and in 1955 joined Bertrand Russell and Einstein in advocating nuclear disarmament and world peace.

Jews have played a disproportionately large role as pioneers of atomic weaponry, and advocates of disarmament. The nuclear debate poses fascinating dilemmas for Jewish ethics. Can deterrence via deadly weapons really promote pikuah nefesh, the sanctity of life?