History of the Hebrew Language

Hebrew is a very ancient language. Its evolution can be divided up into six distinctive periods. The Hebrew language underwent some changes during each of these periods, but it remained basically the same. The six periods are:

The words ‘Hebrew language’ do not actually appear in the Bible. Instead, the terms used are ‘Language of Canaan’ and ‘Judean’. Biblical Hebrew is sometimes referred to as ‘early Hebrew’, in contrast to the spoken and written ‘middle Hebrew’ which is reflected in the Mishnah, Talmud and Midrash.

The very first book that we have that was written in Hebrew is the Bible. We learn from the Bible that other books did exist before it, but none of them still exist. One of the most important ancient Hebrew inscriptions is the ‘Gezer Calendar’. This document lists the months of the year and all the agricultural occupations that are relevant to them. Another example of early Hebrew literature is the Dead Sea Scrolls, which were written by small communities which had broken away from the mainstream of Jewish life and resided in the remote region along and near the shores of the Dead Sea. 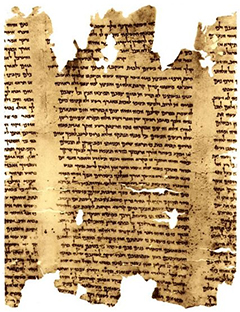 Part of the Isaiah Scroll, one of the Dead Sea Scrolls found at Qumran near the Dead Sea and which are the oldest surviving Jewish religious texts

Seven parchment and papyrus scrolls were found inside earthenware jars. Part of these scrolls can be seen today in the Shrine of the Book in the Israel Museum in Jerusalem.

During the Middle Ages, although Hebrew was not a spoken language, it was the language of Jewish prayer and a great deal of literature was written in Hebrew, including (but certainly not limited to) religious texts. There was, however, great controversy as to how Hebrew was being written. Some felt that the Biblical way of writing Hebrew should be adopted, whereas others, especially poets, tended to adopt their own styles.

During this period many of the Midrashim (interpretive stories based on the Bible) were composed. Many books were written in Hebrew on many different subjects including travel. Hebrew translations were also made of important Arabic books. Hebrew poetry began to be written in all styles and on all different topics, including friendship, love and religion. Religious poems were called ‘piyyutim’.

At the beginning of the modern period the first Hebrew plays and periodicals were produced by ‘maskalim’ (followers of a movement in Europe called the ‘Haskalah’ or Enlightenment in English). This movement taught that the ways of the Jews in Europe were ‘backward’ and this belief is reflected in many novels that were written.

Writers of this time drew upon their knowledge of both the Bible and the Talmud when writing their pieces. They tried to convey messages rather than just tell stories. Many authors of this time believed more in educating than entertaining their audiences. Thus their work constituted very heavy reading.

A very influential man of this period, Asher Ginsberg (better known as Ahad Ha-Am) wrote essays about the Jews and Zionism. His essays were of a social and philosophical nature. Another important writer was Shalom Abramovich (better known as Mendele Mokher Seforim, or Mendele the Bookseller). He wrote many satirical novels in both Hebrew and Yiddish about the Jewish life in Eastern Europe. 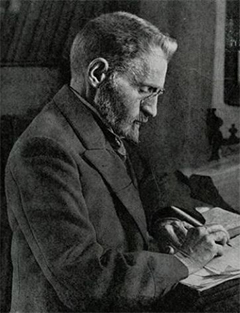 Eliezer Ben Yehuda, the ‘father’ of Modern Hebrew, who worked tirelessly to transform Hebrew into a language once again used for everyday conversation

Many of these great writers moved to Israel where they could speak their own language and feel at home. They continued to write about Eastern Europe, but from this distance they wrote with nostalgia and far more compassion.

At the beginning of the 20th century, Hebrew once again became a spoken language. Due to the fact that so many people today speak Hebrew (and with television and radio), new words and phrases have entered it from other languages. Today in Israel there are many institutes which help people learn the language. These are called ‘ulpanim’ and they teach thousands of immigrants who come to the land with no or little Hebrew knowledge.

Video: About Hebrew (gives a brief history of the Hebrew language, and compares Modern Hebrew with Biblical Hebrew) (note: this video was made in Hebrew but there are English sub-titles)


Video: What is the Difference between Biblical and Modern Hebrew?