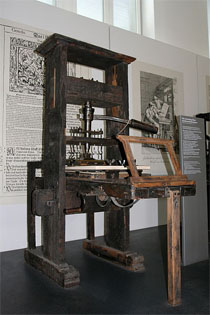 A printing press from 1811. Photo courtesy of Wikimedia Commons

Printing revolutionised the world. It brought knowledge to the masses, increased literacy and spread information. This was also true of Hebrew printing and its effect on Jews.

Hebrew lends itself to printing (unlike its Semitic sister language, Arabic) because Hebrew letters suit separate typefaces. Printers used square Assyrian type for the Torah text; and Spanish cursive for commentary text, or Rashi script. When the latter was used to convey Yiddish quotes in women’s books, it became known as vabertaytsh (women’s Yiddish translation).

The first Spanish book in printed Hebrew appeared in 1476. After 1492, Jewish refugees took their presses to Germany, Italy and major Ottoman cities. In 1503 David Nahmias began printing in Istanbul (the first in the Orient). Hebrew printing in Salonika began in 1512. Early printed works are called incunabula (cradle-books).

Many of the earliest books printed in various parts of the world were written in Hebrew. The first in Lisbon was Nahmanides’ Pentateuch Commentary, printed by Eliezer Toledano in 1489. The first in Africa was a Talmud compiled by Rabbi Abudarham, in Fez, Morocco, 1516. Eliezer Ashkenazi of Prague and Istanbul began the first press in Safed, Palestine, after 1577.

Curiously, many heroes of early Hebrew printing were not Jewish, like the Flemish Daniel Bomberg. In 1520 he printed the first complete Talmud in Venice. The local Jewish community even sent a copy to King Henry VIII of England. But not all Christians were enthusiastic about the dissemination of Jewish knowledge: the Roman Curia started censoring Hebrew books in 1542, and the active Hebrew printers of Venice were ordered to close 12 years later. By the same token, in 1560 certain rabbis objected to the printing of the Zohar, which they feared would divulge secret Jewish wisdom to all (two Italian editions were printed that year).

Joseph Caro‘s Shulchan Aruch was first printed in Venice in 1565, and in Cracow in 1570. Its characteristic page layout was formalised from these first editions, and it became the single most important source for Jewish law from then on.

In 1860 printers in Odessa and Vilna began printing weekly Jewish newspapers, but the Nazi Holocaust devastated the Hebrew printing presses of Europe. Today the great centres for Hebrew printing are New York and Jerusalem.

‘Who were the Soncinos? Jews and the Gutenburg Revolution’ by Dr Henry Abramson