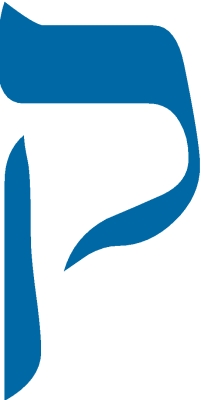 The letter KOOF equals the number one hundred in the Hebrew alphabet, signifying the completion of living matter. It is said that at the age of one hundred a person returns to the dust from which they came.

KOOF signifies kedushah (holiness). This particularly refers to the Holiness of God, which completely distinguishes the Divine from all else.

The word ‘korban’ (sacrifice) begins with the letter KOOF. This signifies the offerings made at the time of the Temple. The word comes from the root word ‘karev’ (to come close), inferring that sacrifices were not only made to appease God, but to aspire towards a higher spiritual state.

In Gematria (the numerological system of the Hebrew alphabet), the word KOOF equals 186, which is equivalent to the word ‘makom’ (place), signifying Omnipresence.

KOOF also means ‘monkey’, implying a false imitation of man. It is said that if a Jew strays too far from the service of God during his lifetime on earth, or becomes too vain, he will end his life as a monkey. The monkey symbolizes emptiness, the epitome of vanity. This is exemplified in the Torah by the building of the Tower of Babel. As punishment for their disobedience in building the Tower, God turned the people into apes and demons.

As the nineteenth letter of the alphabet, KOOF refers to the nineteen-year cycle of the moon in relation to the sun, referring to the lunar calculation of the Hebrew calendar.