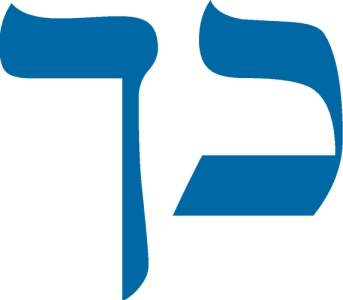 Having a numerical value of twenty, the letter KAF is the first of the double-figured letters in the Hebrew alphabet.

The letter KAF symbolises the keter (crown) of accomplishment that God places upon one who has achieved all the tasks that are collectively set out by the previous letters of the Hebrew alphabet.

As the initial letter of the word crown, KAF alludes to the three crowns in Judaism: priesthood, kingship and Torah.

The word KAF means ‘the palm of the hand’, implying productivity and potentiality. It also means ‘coerce’, implying the power of man to suppress nature with his physical labour.

There are two forms of the letter KAF, one being bent and the other long. The bent version can appear anywhere in a word besides at the end. The long KAF is used to end a word.

The kippah (skullcap headcovering worn by Jewish men) is derived from the root word of KAF.

KAF means cloud, symbolic of the physical power of nature.