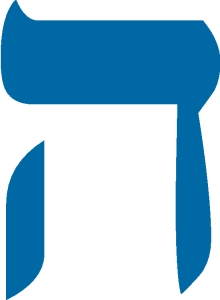 HEY represents the number five. It appears twice in the sacred Name of God, deeming it a symbol of Divinity.

The letter HEY is comprised of the letters dalet and yud. The vertical and horizontal lines of the dalet represent the physical world, while the yud signifies the world to come. Therefore the HEY is symbolic of the combination of the physical and spiritual realms.

The letter HEY signifies the creation. The Hebrew word ‘behibaram’ means ‘when they were created’. When divided, this word becomes bah baram (He created them with the letter HEY). This reinforces the notion that God did not create the world as merely a physical entity, as HEY signifies Divinity.

HEY means ‘take’ in Hebrew, specifically referring to the taking or giving of oneself. As it is said: “Take for yourselves seed.” It is implied that taking for yourself is an act of self-revelation to others, which is the ultimate form of giving.

The Hebrew language is gender-based, hence the masculine and feminine form of most words. The letter HEY denotes femininity, as it is the suffix that makes a word feminine. The Divine presence in the letter HEY, signifies the Shechinah, (the feminine aspect of God).

HEY alludes to the Five Books of Moses, which were given to the Jews by God in five separate voices. The Hebrew word for light (or) is mentioned five times in the description of the first day of Creation. The Five Books of the Torah are regarded as a means of restoring the entire world in the way of Divine Unity.