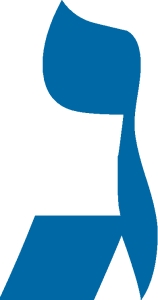 GIMMEL is equal to the number three and is said to denote kindness.

The number three symbolises the three divisions of the Jewish people – Kohanim, the Priests, Leviim, the Levites, and the Israelites. These stem from the three Patriarchs, to form the three divisions of souls. The harmony that is a product of the unification of these three emphasises the equilibrium that is needed to find balance on a cosmological level.

GIMMEL is a form of the word ‘gamol’, meaning ‘to nourish until completely ripe’, or ‘to bring to maturity’. From this notion comes the expression gemilut chessed – an act of great kindness.

GIMMEL is comprised of a vav and a yud. As a whole the GIMMEL represents a rich man running after a poor man, being the letter dalet. The yud symbolises a foot which implies the giving of oneself to another. The yud is seen as the charity that is given to the dalet by the GIMMEL.

GIMMEL echoes the word for camel, ‘gamal’. The camel symbolises the gamol chessed – performer of kindness, as it carries with it the burdens of life on its journey through the desert, equipped with sustenance to help those travelling with it. Its name comes from the word ‘to wean’ and ‘a nursing infant’, signifying its independence as well as its need for nourishment.