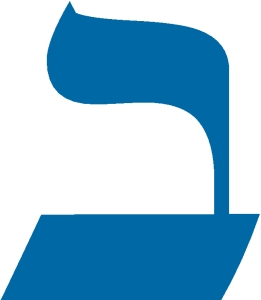 BET is the second letter of the Hebrew alphabet, with a numeric value of two. It begins the plurality, reinforcing the uniqueness of One from which all else is derived.

Aleph and BET share a strong relationship. The word for rock, ‘eben’, displays the aleph and BET next to each other, followed by the letter nun. When divided, the letters form two words, ab and ben, meaning father and son. The rock, signifying strength and stability, is testament to the relationship between father and son; God and humanity.

A large BET is found at the beginning of the Bible. Bereishit (‘in the beginning’) is the first word of Genesis.

Moses received two tablets of the Ten Commandments, emphasising the dual nature of existence. The aleph, which represents the Torah, is declared on the two tablets, which signify the plurality of humanity and the universe.

BET is the first letter of the word bayit (house). This can be interpreted both on a mystical and practical level. The home represents shelter, protection and security. It is also symbolic of the universal home, in terms of a place of spiritual belonging.

BET is made up of three vavs. It is said to represent the formation of a house, always open on one end as a sign of eternal hospitality. The three vavs also represent the innate characteristics of mercy, kindness and modesty.

The BET is open on the north side, denoting the evil ‘from the north’. Therefore BET implies man’s struggle with his evil inclination.