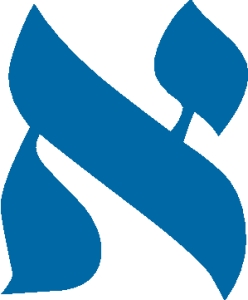 The Hebrew alphabet is the only alphabet in the world where order is necessary for meaning and usage. It is related to a complex system named Gematria, whereby each letter has a numerical value.

ALEPH is the first letter in the Hebrew alphabet.

ALEPH has a numerical value of one and implies the oneness of God. The Hebrew words for one, I, and Lord all begin with ALEPH. These are included in the Shema prayer, which is recited every morning.

The physical structure of the ALEPH (as written) is also very significant. The ALEPH is actually comprised of three other letters: two yuds and a vav. Each yud is equal to the number ten, while the vav has a numeric value of six. The total, 26, is equivalent to the value of God’s four-letter name.

The positioning of the yuds and the vav is highly symbolic. The upper and lower yuds are said to represent the upper and lower waters, while the vav denotes the firmament, as conveyed in the creation. The vav serves to connect the two yuds, therefore emphasising man’s closeness to God, as well as to distance them, instilling God’s omnipotence. As a whole the two worlds form one.