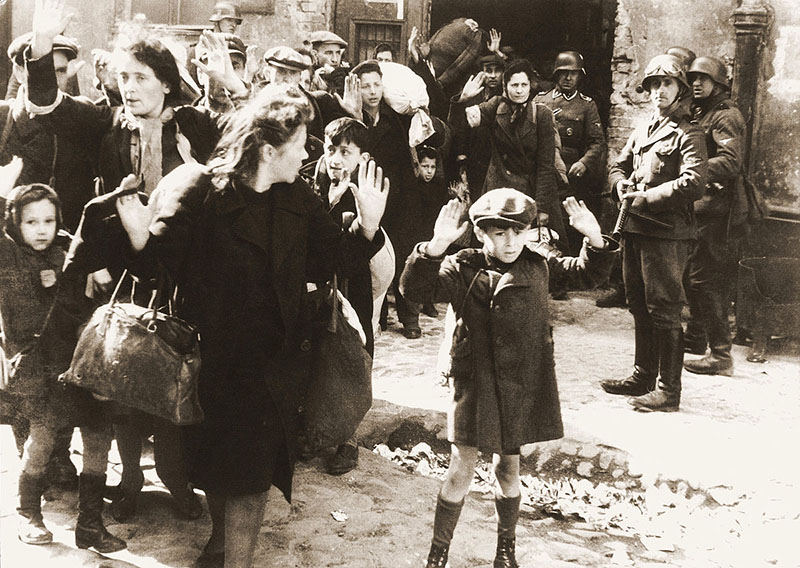 This photo of Jews being forcibly rounded up during the Warsaw Ghetto Uprising in April/May 1943 is perhaps the best known and most iconic photo of the Holocaust.

The Nazi Party, led by Adolf Hitler, held political power in Germany from 1933 until the end of the 2nd World War in May 1945 (‘Nazi’ is an abbreviation for the full name of the Party which – in English – was the National Socialist German Workers’ Party). Nazi policies were antisemitic and spoke of the need to rid Germany of Jews. Initial Nazi policies  in 1933 concerning Jews introduced discrimination against Jews and quickly moved on to persecuting them (at least in part with the hope of encouraging them to emigrate); later, Jews were actively killed and/or forced to live in conditions (such as in ghettos and slave labour camps) which killed a high proportion of the ghetto or camp inmates. As Germany successfully took control of other European countries in the years from 1938 onward, these policies were implemented in those countries as well, leading to the death of some 6 million Jews across Europe, including women and children.

On 20 January 1942 a group of high-ranking Nazi officials met at a conference in Berlin known as the Wannsee Conference to discuss and plan the Endlösung (in English, the ‘Final Solution’) of the ‘Jewish problem’ – in other words, the extermination of the estimated 11 million Jews living in Europe at that time.

Historians debate whether it had always been the Nazis’ intention to exterminate the Jewish people, or whether their policy evolved to that point over time. Undeniably, this was their policy by January 1942, and the reality is that by that time a large number of Jews had already been killed under cover of the 2nd World War (the purpose of the Wannsee Conference was to arrange a more efficient and systematic way to kill Jews). Usually, the Holocaust is considered to have lasted from September 1939 (the start of the 2nd World War) to May 1945 (the end of the War in Europe), but some people consider that it started with the Nazi rise to power in 1933. Certainly the years from 1933 to 1939 cannot be overlooked as they laid the foundation for what came afterwards in terms of the Nazis’ treatment of Jews. 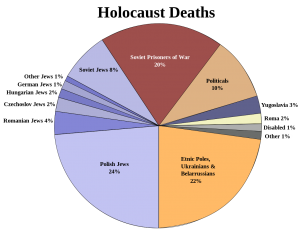 A pie chart showing a break-down of victims of the Nazi Holocaust by percentage. (Chart courtesy of Wikimedia Commons – click chart to see enlarged version)

It is important to note that Jews were not the only group persecuted, or whose members were murdered, by the Nazis (however, Jews were the single largest group targeted by the Nazis and about 40% of all Holocaust victims were Jewish). In the years 1933-1945 large numbers of non-Jews were also persecuted and/or killed by the Nazis. In general, any person or group whose attitudes or lifestyle did not conform with Nazi ideals was subject to subject to persecution; such people included (but certainly were not limited to) the disabled (whether physically or mentally), gypsies (Roma), homosexuals, communists, Soviet POWs, trade unionists, clergy, Jehovah’s Witnesses (a pacifist Christian group suspected by the Nazis of collaborating with Jews), the Roman Catholic Church, clergy, Freemasons, and Slavs (ethnic East-Europeans, including Poles, whom the Nazis considered to be ‘sub-human’).

The Hebrew name for the Holocaust is the Shoah (pronounced sho-ah), which means ‘whirlwind’. The term the Sho’ah, like the term ‘The Final Solution’, refers specifically to the fate of Jews, whereas the term the Holocaust has come to be applied more broadly to include all victims, irrespective of religious, ethnic or political background.

This site does not include detailed information about the Holocaust – instead, we provide a timeline of selected events and links to some of the many excellent website which deal with the Sho’ah in detail.

Timeline of Events Related to the Sho’ah

Yad VaShem – Israel’s Holocaust Remembrance Centre and arguably the world’s leading centre for research into and documentation of the Holocaust.

Aish – Timeline of the Holocaust

History.com – The Night of Broken Glass

Holocaust Encyclopedia – Children during the Holocaust

Holocaust Learning. This website is run by a group based in Leeds (England). It is designed for school students and focuses on the human side of the Holocaust; its excellent resources include a number of testimonies by a variety of Holocaust survivors who later settled in Yorkshire (the part of England where Leeds is located).

Jewish Virtual Library – An Introductory History of the Holocaust

Remember.org – Witnesses to the Holocaust – Survivors and Liberators.  Testimonies by individuals with a variety of experiences.

Yad VaShem – Children and the Holocaust

Holocaust Survivors tell the Stories of their Childhood (11 minutes)