Israel is home to a widely diverse population from many ethnic, religious, cultural and social backgrounds. Some 6.6 million people live there today, including approximately 5.4 million Jews and 1.3 million Arabs.

Israel’s society encompasses a wide spectrum of lifestyles, ranging from religious to secular, from modern to traditional, from urban to rural, from communal to individual. The country is now as crowded as India, having some 300 people per square kilometer.

Historical Jewish presence in the land of Israel

Jews have lived in the land of Israel for nearly 4,000 years, going back to the period of the Biblical patriarchs (c.1900 BCE). There has always remained a Jewish presence in the land of Israel and in Jerusalem, and the Jewish people as a whole always dreamt of returning to and rebuilding it. The concluding words of Israel’s national anthem, ‘Ha Tikvah’ (‘The Hope’) summarise that aim: “The hope of 2000 years:/ To live as a free people/ In our own land,/ The land of Zion and Jerusalem.”

Following their expulsion from Israel some 2,000 years ago, the Jews were dispersed to other countries mainly in Europe, North Africa and the Middle East. Over the centuries, they established many large Jewish communities around the globe – the Jewish ‘Diaspora’. Sometimes Jews in the Diaspora experienced long periods of growth and prosperity, but sometimes they were subjected to discrimination, brutal pogroms and total or partial expulsions.

The Biblical concept of the ‘ingathering of the exiles’ always persisted, however. At the end of the 19th century it was given a modern political manifestation in the form of the Zionist movement. In the middle of the 20th century (1948) the UN granted statehood to the Jewish people.

Israel’s raison d’etre was then and is now still the ‘ingathering of the exiles’. It is a place which provides safe haven and shelter to all Jews who need it. In 1950 the State of Israel enacted the “Law of Return”, which allows every Jew the right to return to Israel and, upon entry, to automatically become an Israeli citizen. Members of other faith communities may apply for Israeli citizenship as they would in any other country.

Upon the founding of the State of Israel in 1948, Jews from around the world joined the Jews already living there

In the first four years of statehood (1948-52) mass immigration doubled Israel’s Jewish population from 650,000 to about 1.3 million. It also changed the structure and fabric of Jewish Israeli society with the result being a majority comprising the established Sephardi community, veteran Ashkenazi settlers and newer Holocaust survivors; and a large minority of recent Oriental Jewish immigrants from the Islamic countries of North Africa and the Middle East.

During the 1950s, these two groups coexisted virtually without social or cultural interaction. The Jews of North African and Middle Eastern backgrounds expressed their frustration and alienation in anti-government protests which in the 1960s and 70s became demands for greater political participation, compensatory allocations of resources and affirmative action to help close the gap between them and the dominant mainstream. 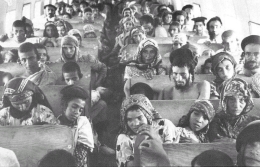 In 1984 a Sephardi-Orthodox religious political party (Shas) was founded. Its influence grew rapidly and it soon became Israel’s third-largest political party, holding the balance of power. By the end of the 1980s, the protest movements had become marginal, marriages between people of Sephardi and Ashkenazi origin became more common, and the inter-ethnic social gap had narrowed.

During the 1980s and 1990s Israel continued to receive new immigrants in larger and smaller numbers, coming both from the free countries of the Western world and from areas of distress.

The largest wave comprised Jews from the various communities of the former Soviet Union. These people had struggled for years for the right to emigrate to Israel and during the 1970s some 100,000 had managed to come. But since 1989 over one million have settled in the country, among them many highly-educated professionals, well-known scientists and acclaimed artists and musicians.

The 1980s and 90s also witnessed the arrival of some 50,000 immigrants in two massive airlifts of the ancient Jewish community of Ethiopia, popularly believed to have been there since the time of King Solomon.

Video: Faith in the Holy Land – the Jews

Approximately 23 percent of Israel’s population is non-Jewish. Although defined collectively as Arab citizens of Israel because of their linguistic commonality, this group includes a number of different communities, each with distinct characteristics.

Almost one million mainly Sunni Muslims reside in small towns and villages in Israel, over half in the north of the country.

An estimated 170,000 Muslims belonging to some 30 tribes live scattered over a wide area in the south. Formerly nomadic shepherds, Bedouin Arabs are currently in transition from a tribal social framework to a permanently settled society and are gradually entering Israel’s labour force. Many serve (voluntarily) in the Israel Defense Forces.

About 113,000 Christian Arabs live in urban areas of Israel including Nazareth, Shfar’am and Haifa. The majority are affiliated with the Greek Catholic, Greek Orthodox and Roman Catholic churches.

Some 106,000 Arabic-speakers living in 22 villages in northern Israel constitute a separate cultural, social and religious community called the Druze. While the Druze religion is not accessible to outsiders, one known aspect of its philosophy is the concept of taqiyya, which calls for complete loyalty by its adherents to the government of the country in which they reside. Many Druze therefore serve (also voluntarily) in the Israel Defense Forces.

Video: Faith in the Holy Land – the Druze

Concentrated in two villages in northern Israel are about 3,000 Sunni Muslims who share neither the Arab origin nor the cultural background of the larger Muslim community of Israel. While the Circassians maintain a distinct ethnic identity, they still participate in Israel’s economic and national affairs without assimilating either into Jewish society or into the Muslim community.