The land of Israel has been known by many names over the course of history – Canaan, Judah, Judea, Palestine and Israel are some of these. But whichever name is used, identification with and attachment to the land remains one of the key features of the Jewish religion and people.

The name ‘Israel’ was given to Jacob after a mysterious incident in which he wrestled with an angel and became an alternate name for Jacob, the father of the Twelve Tribes. Use of the name ‘Israel’ stresses that the land was given by God to the entire Jewish people (the descendents of Abraham, Isaac and Jacob) as opposed to just one or some of the 12 tribes.

Israel was the ancient homeland of the Jews. During Roman and subsequent times many Jews were forced to leave the land, either forcibly taken elsewhere as slaves or because of ecoonomic and other circumstances. But there always remained at least a small core of Jews living in the land. And although a large proportion of Jewish people came to live in other lands, their daily prayers always expressed the desire to return and live again in the land of Israel.

In modern times the land of Israel has been re-established as the homeland for numerous Jews with the founding of the state of Israel in 1948. Today Israel is again a major centre of Jewish life. 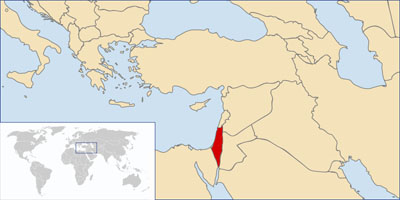 A world map showing the location of Israel
Map courtesy of Wikimedia.